I’m not Oprah. I won’t do a list of Favorite Things. And you won’t get anything for free.  But here’s some things that make me happy.

And since I complain all the time, I like balance. So I am giving you the yang to last week’s yin.

They’re made from corn resin, are mercury free, have recycled parts and smart packaging. AND they are very affordable. Super cute. I want one in every color. I have white and off-white. Their leather straps are made from fish skin. FISH SKIN! It’s already harvested and put to use. (Available at Nordstrom, Macys, and Sproutwatches.com)

As in Cummings the comedienne not, Houston, Bobby Brown’s ex. She’s hilarious, cute, raunchy and still kind of sweet. I love the show and the characters’ dynamics. Her boyfriend is kind of lovable in a scruffy way. (NBC, Wednesday nights) 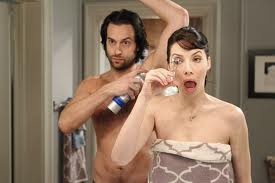 Alex and Whitney from "Whitney"

HELLO? I’ve been saying all year that he’s the most under-rated Harry Potter character. The only reason Gryffindor won the house cup in the first book/movie is because of him, and they over came Lord Voldemort in the last one because of him too. Way to go Neville. And Matthew Lewis is super dashing with his straight teeth.

Bakery Nouveau has the corner-market on this. Enough can’t be said. Come to these parts and find out.

I still enjoy it even though it’s a little gross. A seafood louis salad with tomatoes and Thousand Island is a summer staple.

These little babies are super affordable, planet friendly (I like ‘green’ things) and are some of my favorite make up tools. The bristles are soft, hold up to washing and apply makeup beautifully. They are very affordable and found at Target. Love them.

You can pretty much buy these anywhere.

Duh? That little brown truck brings me all my goodies. Love it!

6 thoughts on “Raindrops on Roses”