Gosh darn it. Every now and then one of those squeak in there. I usually fill my blog posts full of gripes and complaints about my family. It’s easier to bitch and moan and make jokes. But yeah. I’ve got good kids. Most of the time. This will be a complete braggy type parent post that some of you may roll your eyes at. And there are no cuss words either. Some of you will rejoice in this, and some of you will be disappointed. Can’t please everyone.

The Pinewood Derby for my son’s Cub Scout troop happened over the weekend. The kids and James, and James, (mostly James) have been obsessing over these cars. Sanding, painting, weighing, graphite, more weighing… Owen had his title to defend, this was serious business.

Last year Owen won and had still been recovering from some stomach bug. He had probably lost a couple pounds off his already svelte frame and wasn’t feeling so great. I was in Chicago celebrating my brother’s 50 birthday. I remember the text I got from James to say Owen had won. I was thrilled and sad that I missed it.

This Derby was special for me. My first to watch. I braced myself for Owen to be eliminated early. Just to keep myself from being disappointed. He kept winning. Heat after heat, he edged out faster than the other cars. It’s funny watching the different reactions from the boys. Some a little aloof and not really invested emotionally if they got eliminated. Some heartbroken to see their opponents car inch over the finish line before theirs. Crying silently into their dads sides, hiding from their friends to not show the tears.

Owen was aware of this. He knew that sometimes losing is a part of winning. There’s losers for there to be winners. He maintained his composure, not boasting, just smiling.

One heat, there was a tie. An absolute dead heat where none of the dads or judges could tell who won. Owen looked directly at me as if to say, what happens next? Heck if I knew. This was a Pack first. The competition was getting faster. No more cars where the wheels fell of mid-track. No more cars where the gloppy paint job of some 2nd grader would slow it down. This was the big leagues. The bullet trains of Pinewood Derby cars. They decided to have a rematch.  Owen’s car won.

In the final round, it was the same story. A dead heat. Owen’s car and his opponent. A rematch would determine the winner. Funny, I don’t think the ol’ days of Pinewood Derby’s had iPhones, FlipVideo and camcorders to give us the photo finish! You could tell Owen was beaming. He was full of happiness. All the scouts shook each others hand in good competition. There was cake to celebrate. I asked if Owen wanted a piece. He told me no, he was too excited to eat.

By this time I needed a cocktail. It was only 3 in the afternoon, but all that cheering and tension had put me on edge.

Awhile after with milkshakes and cheeseburgers and friends to celebrate (and a margarita for mom) we went home to XBOX, Spy Kids and of course a hot pot of tea.

Later that night, it seems like sometimes when I just want the kids to go to bed, they do things like get along with each other, or read quietly to themselves. Which makes it hard for me to push them to get their jammies on and then I get distracted. That night Owen asked me about 9/11. The kids seemed enthralled in my memories of that day. So I spent 30 minutes telling them of all the events that unfolded while I watched on TV with Emma as a baby.

They said that in school they don’t teach them about the Pentagon or the plane that went down in Pennsylvania. We talked about the innocent moms and dads that died that day. How dads went on business trips and didn’t come home.

Both kids were getting teary eyed. I wrapped up my stories and sent them to bed. I didn’t need nightmares keeping them up.

I rubbed his back like I always do and kissed him goodnight. He thanked me again for being ‘the best mom’. One of those reasons for achieving ‘best’ status was that I let him snack a lot and play video games. (hmm, I think this just makes me lazy, but I’ll take it.)

I kissed Emma goodnight in her bed. She was peaceful and content. No sassing, no drama. No complaints. Just an ‘I love you’ while her eyes were closed and she was already half asleep.

It was a good parenting day. 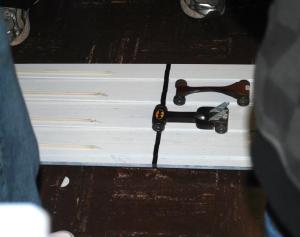 The final race at the finish line. Owen's is the Batman car on the bottom. I don't know how James got this shot. A clear winner for sure.