I know, I know. Oscars Schmoscars. Are you tired of hearing about them yet? Me too. Kind of. But just read one more. Please?

My post last week about Meryl, Bow down to greatness, oh Meryl, I’m betting on you, was my ode to her career. Her last trip up the Oscar steps to receive the statue was 30 years ago.

So don’t gripe that she always wins. She doesn’t. She’s always NOMINATED.

Vegas, all the online polls, and the Red Carpet polls had predicted Viola Davis to win. She was wonderful in The Help. She was outstanding and probably had the role of her career. Every one of those women nominated in that category should have won. They were fabulous-Michelle, Glenn, Rooney, Viola, Meryl—- it was a talentgasm.

But sorry Viola- the night belonged to Meryl.

She even wore a gold dress to foreshadow her best accessory. Just like I said, she wore little makeup, swept up her hair, and threw on a dress, and looked fabulous.

So I just want to say, you are welcome Meryl. I put it out there in the universe that you should win. And you did. Your acceptance speech was brilliant too. I wouldn’t expect anything less. 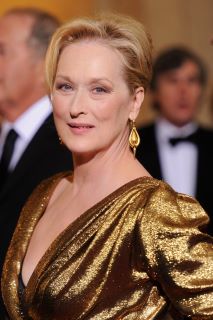 Congrats to you, Iron Lady

I’m hearing that the Oscar buzz this year is Viola Davis may win for Best Actress for The Help. That’s great and all….but….. Meryl, Meryl, Meryl- needs. to. win.

I know Meryl has won before. But she is so frickin’ fantastic all the time. She has won twice- Best Supporting Actress for Kramer vs. Kramer and Best Actress for Sophie’s Choice. That was 30 years ago!! She’s been nominated practically every year- from A Cry in the (dingo ate my baby) Dark, to The Devil Wears (bitch Miranda Priestly) Prada. She leads most ever nominations with 17 total. 17 for crying out loud!

Accents, prosthesis, nudity or disabilities are pretty much a shoe-in for winning. Aside from the nudity part, Meryl has completed all these criteria.

Viola has been around a while too.  With some starts on NYPD Blue, Law and Order, she even costarred with Meryl in Doubt. She even worked with George in Syriana. Oh, I’m sorry- George Clooney. We are on a first name basis. AND Meryl and George did voices for Fantastic Mr. Fox. It’s all a 3 degrees of Hollywood separation thing.

Then there’s Rooney. She is a long shot to win. But I always appreciate someone’s devotion to their craft. Her transformation to Lisbeth Salander was astounding. Nipple piercings? Computer hacking skills? Visiting an autism center?  Her nomination should be an honor in this stage of her career. Just please Rooney- please don’t turn into one of those Kristen Stewart types where you look completely uncomfortable with your fame, pretend to ‘endure’ the fashion thrown at you for free, say that you owe it all to the fans but look like someone is giving you a colonoscopy every time you are interviewed. Anyway… you get the idea.

Oh and then there’s Glenn. Glenn, how have you NOT won yet? After Fatal Attraction I was mesmerized. After Dangerous Liaisons I was enchanted. What can you NOT do?? The Victor/Victoria Albert Nobbs get up is superb.

Michelle- your portrayal of Marilyn is spot on. Dawson’s Creek you are far from. You will have a promising career of many more nominations, I promise. You will win. Just not this year. 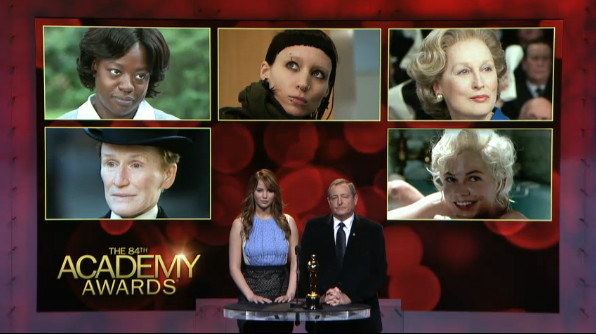 How to choose one? (courtesy therepublika.com)

Everyone in this category this year is deserving. But my money is on Meryl. Votes are cast. Couture is being pressed. Jewels are on loan. Meryl will probably show up wearing something understated with a big clunky necklace. Her hair swept up casually and not even wear much makeup. And she’ll look stunning like always. Because she knows she’s awesome. Right? I mean- she’s Meryl.

How’s this for irony? Last night I was watching the Kennedy Center Honors. Meryl Streep was being honored. ‘Nuff said. She is the BOMB. It was fantastic and she looks fantastic and one day I will meet her. Oprah says if you put it out there in the universe then it will happen. So there.

I went to bed dreaming of Meryl, the Oscars and how I will congratulate her on her win, because the woman has been nominated 16 times and she’s bound to be nominated for the 17th time this year and they sure as hell better just give  her the damn thing. I also thought of Rooney Mara, because she is just really cool.

And then I woke up and saw that a fellow WordPress blogger had honored me with the 7 x 7 Award! Yay me!

This was bestowed upon me by The Dissemination of Thought. A clever guy that writes and feels I’m clever too. That, or it’s just a cruel joke, like in Little House on the Prairie when they nominated that one kid for class president only to make him do yucky, awful things.

I’m supposed to list 7 of my blog posts and what is so great about them. These are hand picked by me and not my mother. So they will probably have swear words, and Daniel Craig. Poor James.

Most Beautiful- My post to my dad on his 80th birthday. So sweet. Ode to My Dad

Most Helpful- I would like to say my post about surviving the holidays, or any of my product features, but in reality it was my post called Medicated and Proud of It. A lot of people related to my rants on how to survive the day to day and see through the bullshit.

Most Popular– My post for Ashley and her completion of chemo. I think her whole family read it, that’s why it was such a busy site day! Dedicated to Ashley

Most Controversial– Well, I’m guessing it was my post on the show Glee and teen sex. Go figure. Glee- Coming out, First Times, and More Parental Anxiety

Most Surprisingly Successful– This sounds like, ‘oh, I wrote this and thought it was crap, but apparently you’re either stupid or it was better than I thought’. It was my fantastic list on parenting. Things You’ll Do Because You Are Parents

Most Underrated- Definitely my post on Ben & Jerry’s Schweddy Balls. Dang I thought this one was superb! Dear Ben and Jerry’s

Most Pride-worthy– Only because it probably means more to me than anyone else. When Owen gushed his love for us at Thanksgiving. My Cup Runneth Over and My Heart Melteth and My Eyes Teareth

So there you have it. See for yourself what you think. I have like frickin’ 60 posts published, so there’s lots to choose from. Go ahead, waste your time and read all of them.

Here’s 7 blogs I enjoy too that I’ve bestowed the 7 x 7 Link Award. Like a chain letter sort of.

Never Done it That Way Before

Stay Out of My Head