This is not the NFL. No replacement refs here. No SCABS.

When you wake up in the morning, get your own damn waffle. You can reach the toaster.

When you can’t find your socks, look in the drawer. Or the dryer, or the hamper. Have you ran the washing machine? It’s not magic, it doesn’t run on its own. Oh and don’t just load the blasted thing, put that shit in the dryer, then FOLD. IT. Yep. Guess what? Folding and putting the laundry away is THE BORING part. Uh huh. You may think ‘you’re all that’, putting them dirty clothes in the machine. But that don’t make you a hero.
The battle is in the taking those socks, making them into sock balls. Taking t-shirts that are inside out and putting them right side in.  Or out. Whatever. Oh dear GOD how does every motha fuckin’ shirt get inside out in the wash??? I don’t take off my shirts and put them over my head like that. Is that necessary?

Garbage on the floor. Throw away your own furkin’ wrappers, kleenexes, band-aids, used ones especially, popsicle sticks, gogurt tubes…. oh my gads, is this a frat house??? Throw away all toe nail clippings. I shouldn’t have to ask you twice.

After dinner, if I’m at a PTA meeting, you know one of the many things I do for free, don’t just pile up the dishes on the counter over the dishwasher. Put them IN it. Put the pans in the sink. Put away any leftover food in the refrigerator. Oh, and this is big, WIPE. OFF. THE. COUNTERS. I know it’s hard. It can be yucky. What, all those crumbs and spills. Yeah, disgusting.

If I make the danged dinner, least you can do is clean up after it.

All your clothes and random belongings need to go up to your room. That means all of you. I’m tired of looking at your thermals, hoodies and soccer shoes. Why are there always socks in the family room? Hair accessories are the same. Do they multiply like bunnies? Why are there always bobby pins and hair elastics in every room of the house?

If you have a dish in a room of the house, other than the kitchen, put it away. I don’t want to find your milk glass in your bedroom two weeks later.

Toilet paper needs to be replaced on the roll. How many times do I have to say this? If you are using the last roll, go get several more from the bathroom cupboard.

If you use the last milk, go into the garage fridge, and get the next carton.

Now that we have that established, I think I’ll go to the spa, and then eat bonbons watching an entire season of Boardwalk Empire on DVD from the library.

Someone call for pizza.

What is it with food reaching into our souls?

I’m not a food blogger, and I don’t have beautiful pictures of food to go with my words that compare to a Bon Appetit spread.

But I wanted to share my mom’s talent for bringing us around the table in gastronimic harmony. My brother flies in from Chicago to have roast goose and Yorkshire pudding. My kids want to stay the night at her house just so they can eat ‘Oma’s food’. She’s the pied piper of her kin.

Mom was taught the old fashioned way. Put in the kitchen as a young girl in post World War 2 Germany with her Tante and her Oma. She watched, stirred, sliced and learned. She watched her Oma snap a chicken’s head off for Sunday’s dinner. This chicken was her pet at some point. But hey- this is post war, you’ve got to eat.

My early memories of food also consist of porridge. Porridge is what we called it growing up and what my parents call it. My dad is English, maybe this is why. I always felt like Goldilocks, but I never thought it was ‘just right’. I didn’t like porridge as a kid. But that’s what we had Monday through Friday and you ate it. No question. I couldn’t wait for the weekend when we could have cold cereal. But now I realize as an adult. My parents make really good porridge. It’s funny what you think is gross as a kid. But get used to. Then go off to eat it somewhere else and then realize, ‘hey, this is really gross, they don’t know what they’re doing.” So now I appreciate my parent’s porridge. A pinch of salt. That’s their trick. Not everyone knows this.

The majority of my memories of my mom’s cooking are good (minus the zucchini or cream of mushroom crepes she made when I was 5). Her cooking is the kind of cooking you come home for. The kind of cooking holidays center around. My German mother would make a pizza every Saturday night. She would start with making the dough. There would always be sausage on it and sometimes mushrooms, which I would only appreciate when I was about 15. I picked them off when I was 6. We would eat pizza and watch the Muppet Show every Saturday night. It didn’t need to be Italian, it was just damn good crust made by a German. She’s mastered pie crust, tart crust and bread crust. We like crusts.

Christmas was roast goose that she would flame with a splash of brandy before my dad would carve it. Oh, and my dad can carve better than Chuck Norris. I’m certain. If there was an Iron Chef carving contest- my dad would win.

Red cabbage simmered with apples and vinegar. So German. So good with goose gravy. Goose gravy that she would make for days before with all the giblets and whatnot that comes inside the carcass in that little paper baggy that 80% of Americans throw away, I’m sure. Mashed potatoes mashed only to the brink of fluffy. Not too much so they get gluey. Another mistake of most cooks. Cream, butter, onions. The trifecta of all good things made in the kitchen. Julia Child style.

What’s strange is my mom can cook really good Thai food too. How funny is that? She rarely makes (make that never) speatzle, she says it’s too much work to make. She doesn’t do schnitzle much either. But everything she does has her signature. The signature of decades in the kitchen and knowing what the heck you’re doing. She can make gravy that is rich and dark and poultry that is tender and not cooked a minute passed to the point of dryness. White meat that doesn’t need the gravy. But to not pour it over everything would be a crime because the gravy is so good.

Making Christmas dinner at my house this year, I was searing the prime rib to put in the oven; and I felt confident in my abilities. I thought, everything I do in the kitchen is because I watched my mom, ate her food, asked her questions and now I can do the same for my family. It’s really a bonus when I teach her something she didn’t know. Maybe she just pretends she doesn’t know to make me feel good. I stepped aside though for her to make the Yorkshire pudding and the gravy. Why try to paint Monet when Monet is standing there with a paint brush?

I think people who can cook well,  have an intuition, an instinct that can’t be learned from books or classes. I think they are people in day to day life that listen, care and are compassionate to humanity (except Gordon Ramsey, he blows this theory wide). How else would they know to fluff a meringue to perfection, slice plums for a cake, season green beans like summer in a bowl? There’s a nuance that is captured between the food, the cook and who they cook for. It might be love. Yes, it’s love for sure when it comes from mom. 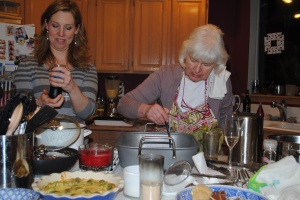 Yep, that's mom and me slaving over the dinner. WIth Champagne.

Ahh, the sublime Yorkshire pudding. An English staple perfected by a German. It's not really a pudding, more like a pancake. Leftovers taste good in the morning with syrup. Who am I kidding? What leftovers?